The Marvellous Toys Of Gerry Anderson 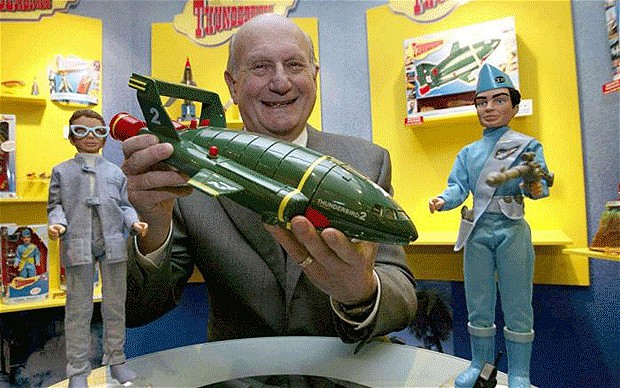 On the 26th of December, Boxing Day, 2012, Gerry Anderson passed away, aged 83. He was best known to the public as the film and television producer who created the 1960's puppet show THUNDERBIRDS, along with CAPTAIN SCARLET AND THE MYSTERONS, STINGRAY and SPACE:1999. He passed away in his sleep, having been suffering from increasing dementia over the last few years. To those of us born in the 1960's or 1970's though, he along with his production teams, were visionaries. Our childhood would have been a great deal poorer without his shows, and the remarkable ideas and spectacle contained within. Most importantly, without Anderson, we wouldn't have had some marvellous toys to play with. So I can't think of any better way to pay tribute than to take a look at some of those toys...

Nearly all of the fantastic array of vehicles and spaceships which were featured in Anderson's many TV shows were reproduced in die-cast metal toy form by Liverpool toy manufacturer Dinky Toys, a subsidiary   of Meccano. What you got was a toy that would take some hammering - built to last. Looking at the catalogue extract above, I think I had nearly all of these and more - the Lady Penelope Pink Rolls Royce unfortunately never crossed my path. Some were new, some were second hand, but that was the thing about these toys - virtually every boy would have at least one of them.

I'm going to assume that anybody reading this has a bit of knowledge of the shows they came from. If not Wikipedia is your friend. Here's my top five... 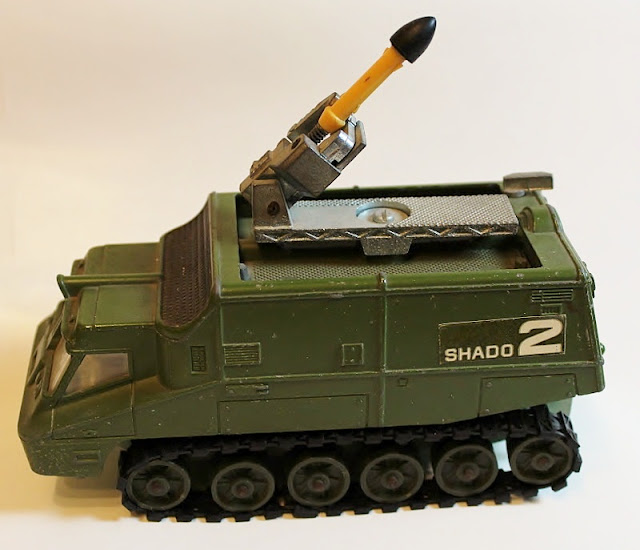 What to say about this bad boy? Don't drop it on your foot or you'll cause serious damage. And not to the toy. This thing was like a brick. The first thing to notice was that it didn't look the same colour as the TV version.This was a strange anomaly with almost all the Dinky Anderson toys - why? Not a clue, but I won't dwell on it, honest. Anyway, the caterpillar tracks were usually the first thing to fall off, but that wasn't a worry as that just meant it could travel faster across the carpet. Sorry, forest. The real beauty here was in the flip top roof, which at the press of a button flipped to reveal a lethal missile launcher. And I mean, lethal. A spring propelled rubber tipped plastic missile, ideal for firing at the cat, (who obviously was of extra terrestrial origin - see also the Starship Enterprise post earlier), and which, if it hit you in the face, could cause some serious damage. So, excellent work from Dinky! 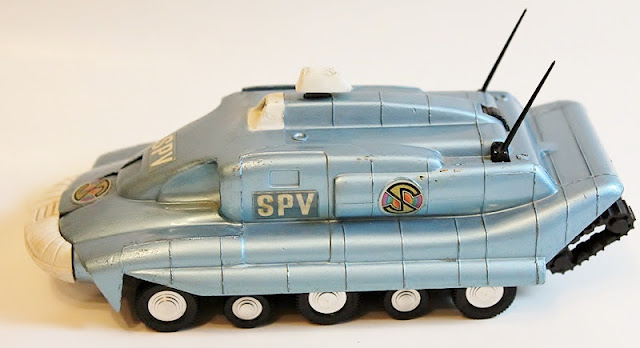 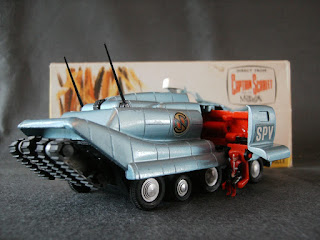 From the CAPTAIN SCARLET series, the titular character's tank like pursuit vehicle, the SPV, is another ingenious idea from Anderson's Century 21 team. And another potential lethal object if thrown at someone. Which kids do. Has it got gadgets? Does Brains stutter? Of course it has. Missile launcher at the front of course, but not as eye-gouging as the previous toy. Plus it rarely worked. Caterpillar tracks at the rear for reasons which never became readily apparent. These also tended to fall off as well. Radio antennae which could be raised or lowered. Plus, the main novelty... press the button on the roof and the side door shoots out to reveal a little Captain Scarlet figure sitting in his driving seat. "But he's backwards" I hear you say. Yeah, the novelty was he drove his vehicle sitting backwards using video screen technology. Cool isn't the word. Bloody brilliant. I loved this, though why I felt the need to more or less destroy it I'm not sure. Kids, eh? 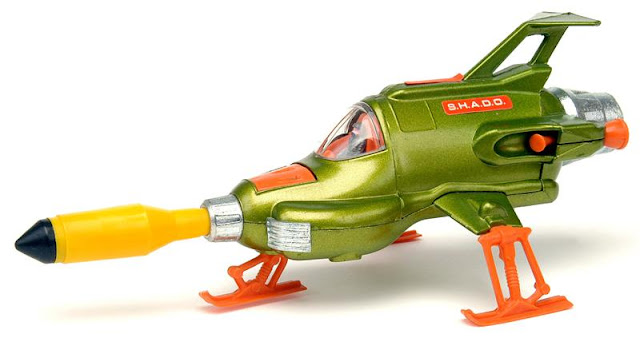 Okay, lets get the major plot defect out of the way now. The show UFO was about an ongoing series of visits to and attacks on Earth by a mysterious alien race. So far, so Mysteron. So there were defences put in place by the secret organizaton, SHADO (Supreme Headquarters, Alien Defence Organisation). We saw one of the ground defences earlier at number 5, and there were also the undersea launched Skydivers, which you couldn't buy as a toy. BUT as the main first line of defence against the alien UFO craft, we have the very green and cool looking Interceptors... with it's ONE missile, Brilliant. So if it misses it's useless. Good plan as a first offensive (slaps hand on forehead). In the real world of the living room, this really was a weapon. Yes, the missile DID fire. Yes it did hurt. Yes, it did make contact with fur. Did I mention it was the wrong colour? Because it WAS. Grrrr. 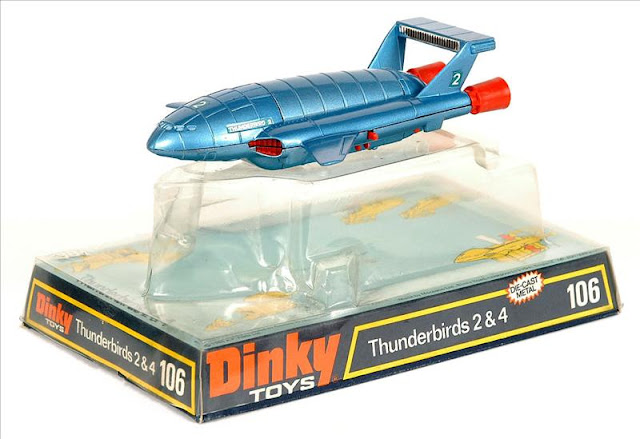 Surely some mistake? This is the best toy ever! No. It's not. It's close but not quite. Because it was the wrong frigging COLOUR. Thunderbird 2 is GREEN. Always has been, always will be. Were they all colour blind at the factory in Liverpool? It is NOT BLUE. I had to wait another 18 years for THUNDERBIRDS to become popular again with a new generation of kids before I could get one which is the right colour, made by Matchbox. So I mark this down out of spite. And my original blue toy never worked properly because some bright spark at the age of 5 decided to take the screws out and take it to bits, and then lost the screws. Didn't lose the little plastic Thunderbird 4 that sat in the pod, mind you. Please note that anybody who says that Thunderbird 2 wouldn't actually be able to fly, as it's wings were the wrong way round aerodynamically, is a twat.

Yes, this SHOULD lose marks due to it being green but they corrected it for the freighter, so there. THIS is the dog's bollocks. It's got everything. Well, that's a lie, it does sod all, but in your childhood imagination, it did it all. It's got a pod, like Thunderbird 2, which separates from the main craft. The transporter's pod has two doors that open. That's it. We were happy with that! The freighter's pod carries nuclear waste (not really - only pretend. That would have been a bit much even in the slipshod Health & Safety free 70's) which you can winch down on a little bit of string and magnet. That was it. No missiles. The cat was safe. 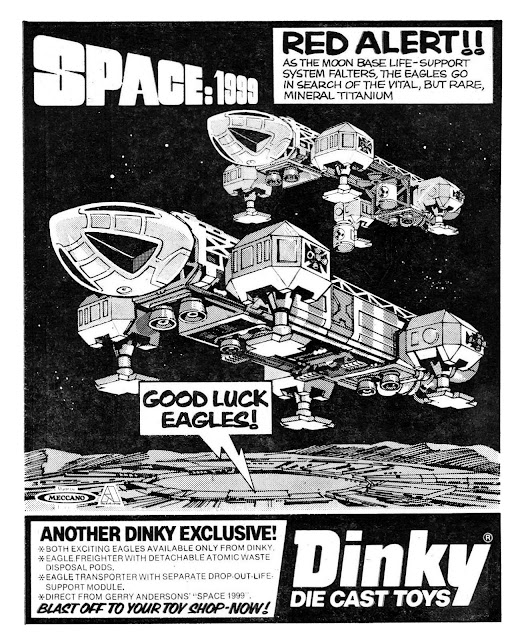 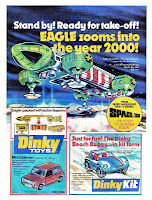 Why was it so good then? It just was. A great example of design and the concept behind the craft was great - these were working functional ships built for multi-purpose use. They were believable  And that was the great thing behind all of the craft and cars from Anderson's shows - there was thought and effort put in to make them seem as if they'd work in real life. They weren't just tacked on, they helped make the world created for each show seem a little more real, despite the puppets and stiff actors who populated them.

So there you go. Five great Dinky toys I had, and loved, to the point of destruction in most cases. But toys aren't for looking at, they're for playing with. 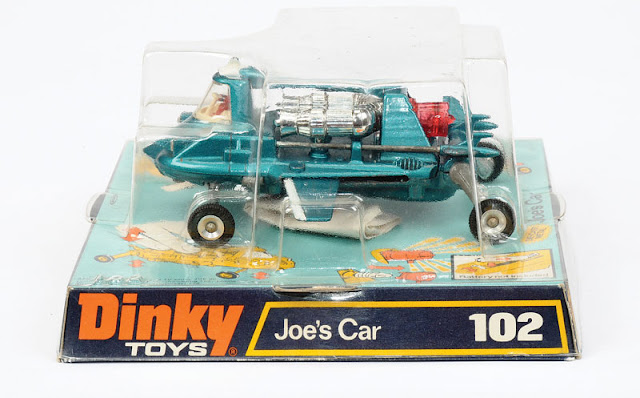 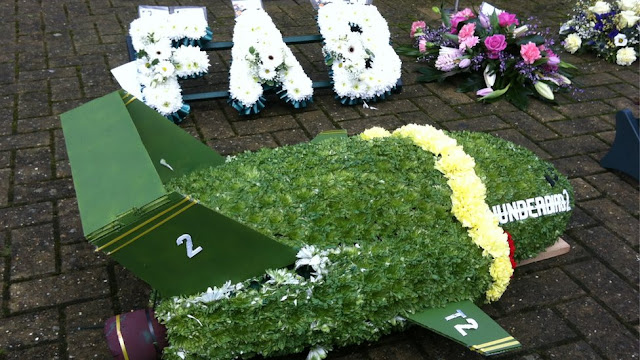